In this lesson, you’ll learn how to build a Sum of the Parts valuation based on the financial statements for two separate divisions at a company (SunPower) and a proposed spin-off of its Maxeon manufacturing segment.

The Sum of the Parts Valuation is useful for answering several questions:

1) If a large company is considering a spin-off or divestiture of one division, how much might this division be worth? And could the large company’s market valuation increase after the sale?

2) Is a conglomerate-style company, such as Siemens or General Electric, currently being undervalued by the market because its segments are worth more separately than they are together?

3) Would it make sense for one company to split into two separate entities if shareholders of the original company could significantly increase the value of their shares?

This tutorial will cover a Sum of the Parts Valuation for SunPower’s spin-off of Maxeon.

SunPower and Maxeon: Rationale for the Sum of the Parts Valuation

Its valuation multiples were closer to those of solar manufacturing companies, such as Canadian Solar and First Solar:

But solar manufacturing accounted for only about half of SunPower’s revenue, so management and investors felt the company was undervalued.

The logic for this spin-off was simple: after splitting into separate entities, SunPower’s manufacturing division might continue to trade at a 0.5 – 1.0x revenue multiple…

…but the installation and services segment could potentially trade at a much higher revenue multiple in the 4.0 – 5.0x range, in-line with comparable companies in that sector.

To build a SOTP valuation, you complete the following steps:

Step 1: Find separate financial statements for each division and project them. This is often the most challenging part because not all companies break out their financials this way!

Step 2: Select separate sets of comparable public companies for each division (and sets of precedent transactions, if applicable).

Step 3: Build a DCF model or other intrinsic valuation, such as a NAV model or dividend discount model, for each division.

Step 5: Move from the Implied Enterprise Value to the Implied Equity Value using the normal “bridge,” based on the entire company’s Balance Sheet.

Step 6: Then, divide by the company’s share count to get its Implied Share Price and compare this number to its Current Share Price (if the company is public).

In this SunPower / Maxeon example, a few steps are slightly different because it uses a real-life spin-off with proposed deal terms.

Step 1: Find Separate Financial Statements for Each Division and Project Them

This step was simple in this example because SunPower provided separate financial statements for Maxeon in its filings at the time of the spin-off.

We projected both companies’ financials based on drivers such as the Megawatts (MW) of power installed and the Price per Watt:

We also adjusted SunPower’s financial statements in the projected period by removing Maxeon’s revenue and expenses and reallocating some corporate overhead, interest, and D&A: 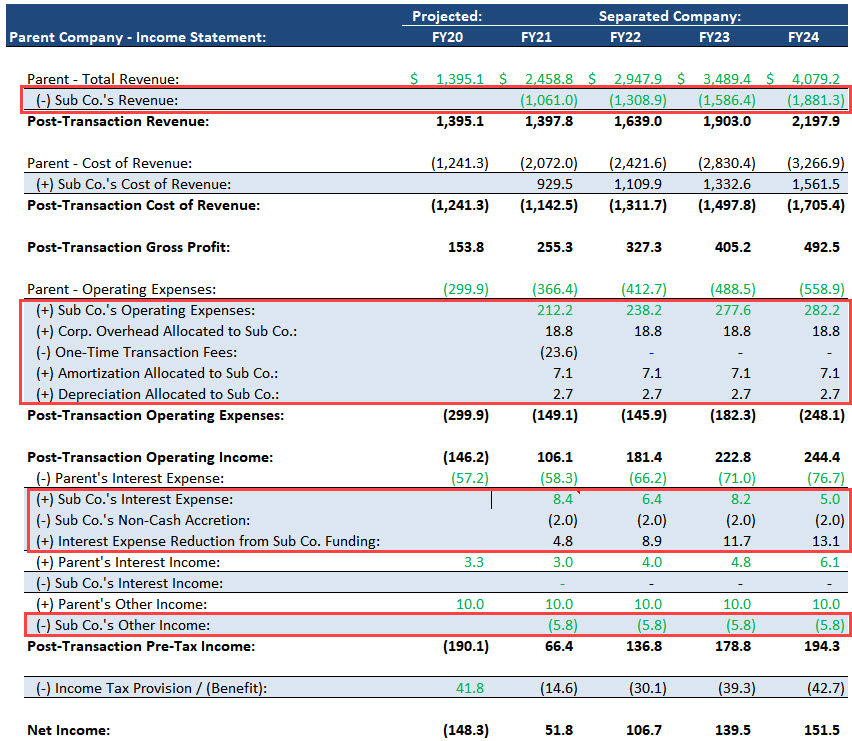 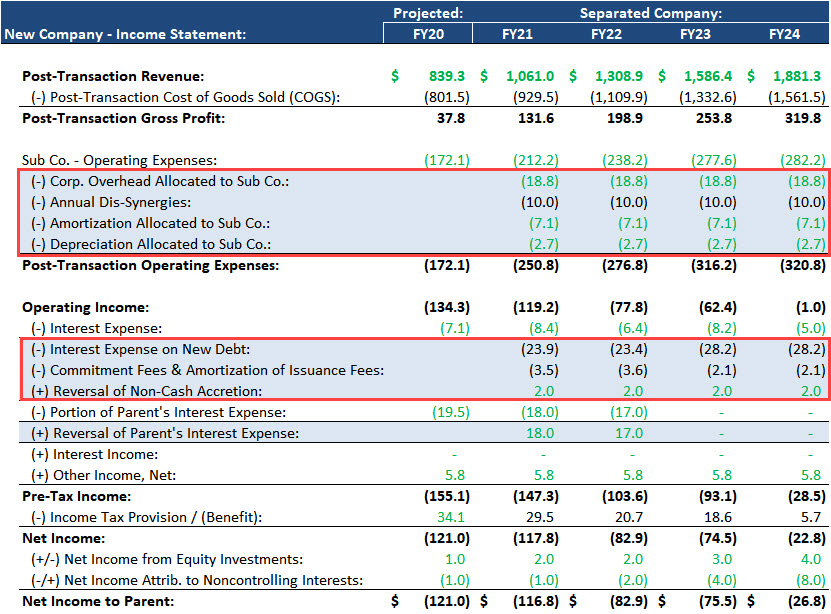 For SunPower, we selected the two public, pure-play solar service/installation companies at the time of this transaction: Sunrun and Vivint Solar.

They traded at revenue multiples that were far higher than SunPower’s:

For Maxeon, we selected a mix of Chinese and North American solar manufacturers, with median revenue multiples between 0.5x and 1.0x:

We do not do anything with these multiples at this point.

Step 3: Build a DCF Model for Each Division

The DCF model for each company is standard: Revenue, EBIT, and NOPAT, add D&A, add/subtract the Change in Working Capital, and subtract CapEx in the Unlevered FCF calculations.

We calculate the Terminal Value with the Multiples Method and Perpetuity Growth Rate Method.

There are two differences worth noting;

1) Net Operating Losses – Since both companies have significant Net Operating Loss balances, we project the NOL creation and usage in the explicit forecast period and their possible contributions to the Implied Enterprise Values at the end.

2) 15-Year Projection Period – Since Maxeon, the lower-margin manufacturing company, will take years to become profitable, we extend the projections to 15 years rather than the normal period of 5-10 years.

You can see part of the DCF for Maxeon below: 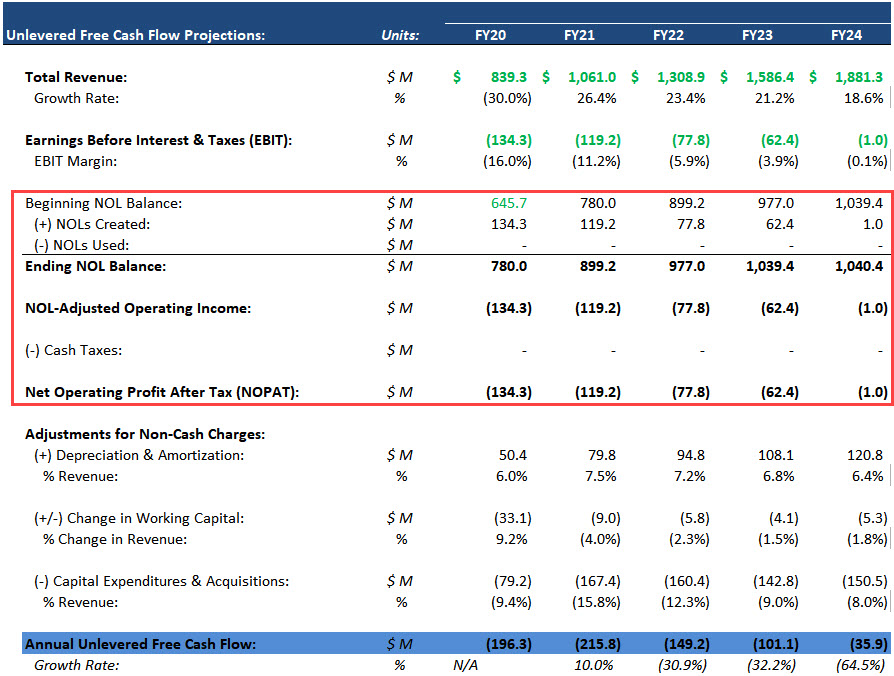 We build sensitivity tables based on the Discount Rate, Terminal Growth Rate, and Terminal Multiple to determine the range of Implied Enterprise Values for each division.

Once we have all these individual pieces, we can put them together to estimate the value to shareholders if this spin-off proceeds as planned.

Since both divisions have negative EBIT and EBITDA currently, we focus on the revenue multiples and the DCF output in this part: 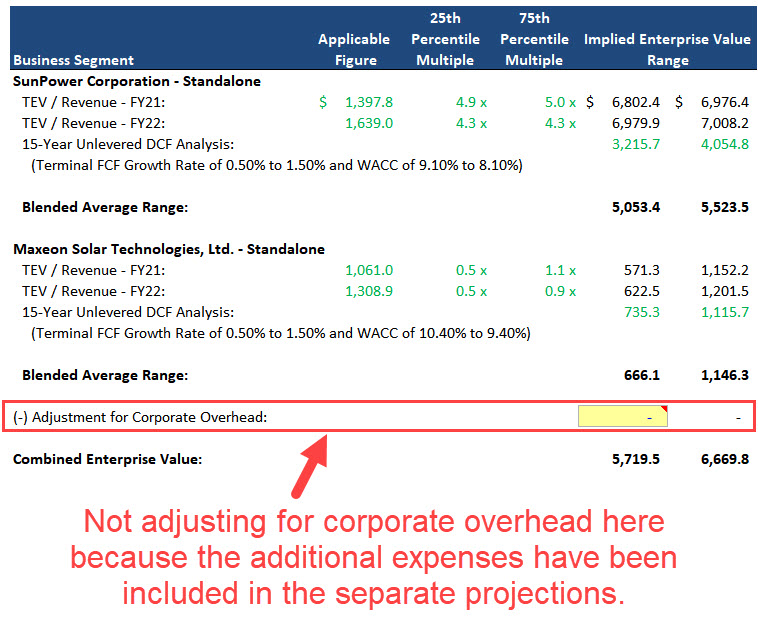 In a normal Sum of the Parts Valuation, we might also make an adjustment for corporate overhead here.

One problem with analyzing the divisions separately is that they often need services that the larger parent company provides.

And if the expenses for these services are not included in the separate financial statements, each division’s profitability might be overstated.

For example, if neither division has an Accounting team but instead depends on “corporate headquarters” for this function, we need to subtract the capitalized version of that expense.

We skip this adjustment here because:

2) We’ve assumed “dis-synergies” for Maxeon in the separate model, so its Operating Income is already lower as a result of having to pay for expenses that the parent previously covered.

3) SunPower is already a self-sufficient company, and it will keep all its non-Maxeon divisions after the spin-off. There are no additional expenses to subtract because SunPower already has teams to handle functions such as accounting, IT, and HR.

Even though the items in this bridge will change slightly following the spin-off, we’re still using the pre-spin-off numbers here because we’re looking at the entire company.

In a normal Sum of the Parts Valuation, this step would be a simple matter of dividing the Implied Equity Value by the company’s share count (with support for a circular calculation for the diluted shares, if required).

Here, we divide by the combined share count of SunPower and Maxeon: 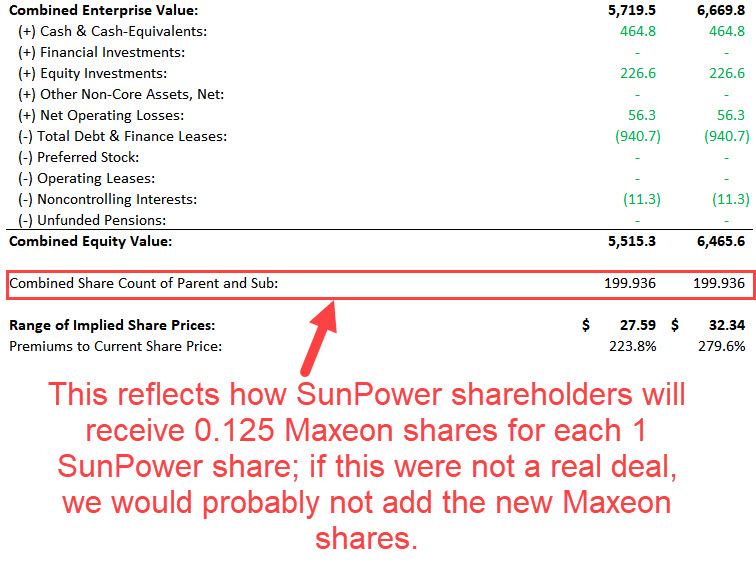 Since this is a spin-off that happened in real life, we want to reflect that SunPower shareholders received 0.125 Maxeon shares for each 1 SunPower share.

By completing this spin-off, in other words, the total share count increased.

Some would disagree with this adjustment and say that we should use only SunPower’s pre-spin-off share count.

If you changed the model to reflect that, the results wouldn’t change much (there’s a ~5-10% difference).

Sum of the Parts Valuation: Conclusions for SunPower and Maxeon

The overall conclusion is that if this spin-off is even slightly successful, the SunPower shareholders should see a big increase in the value of their shares.

The share price may not increase by 200-300%, as suggested above, but if the pure-play services/installation division (SunPower) trades at a revenue multiple that’s even slightly closer to the multiples of Sunrun and Vivint, it will be a win for the shareholders.

The operational logic is more difficult to justify because we don’t know the true benefits of spinning off the manufacturing division.

SunPower claims that it can reduce costs more effectively to compete with the Chinese solar PV companies that way, but we don’t have enough information to say for sure.