In this tutorial, you’ll learn about the differences between EBIT, EBITDA, and Net Income in terms of calculations, expense deductions, meaning, and usefulness in valuation and company analysis. This tutorial reflects the new accounting rules for Operating Leases that went into effect in 2019.

Interview questions about EBIT vs EBITDA vs Net Income are some of the most common ones in investment banking interviews.

Some of the most common interview questions related to these metrics include:

“Is EBIT or EBITDA better? What about Net Income? How are they different?

Which one(s) should you use in valuation multiples when analyzing companies?”

At a high level, EBIT, EBITDA, and Net Income all measure a company’s profitability, but the definition of “profitability” varies a lot.

EBIT (Earnings Before Interest and Taxes) is a proxy for core, recurring business profitability, before the impact of capital structure and taxes.

EBITDA (Earnings Before Interest, Taxes, Depreciation, and Amortization) is a proxy for core, recurring business cash flow from operations, before the impact of capital structure and taxes.

So, they all represent profitability or cash flow in some way, but their exact calculations and meaning differ quite a bit.

For Aspiring Investment Bankers Only:

Master Financial Modeling As It Is Performed In Real Life, With Our Simple 3-Step Method

Nearly there: please tell us where to send your...

Master Financial Modeling, As It Is Performed In Real Life.

EBIT vs EBITDA vs Net Income: The 6 Key Differences

We’d summarize the key differences between these metrics as follows:

How to Calculate EBIT vs EBITDA vs Net Income

EBIT (Earnings Before Interest and Taxes) is Operating Income on the Income Statement, adjusted for non-recurring charges.

EBITDA (Earnings Before Interest, Taxes, and Depreciation & Amortization) is EBIT, plus D&A, always taken from the Cash Flow Statement.

Here are example calculations for EBIT vs EBITDA for Target and Best Buy:

EBIT and EBITDA are available to Equity Investors, Debt Investors, Preferred Stock Investors, and the Government.

This is because no one has been “paid” yet! These metrics are both BEFORE Interest Expense, Taxes, etc., since they start with Operating Income on the Income Statement:

EBIT deducts OpEx and the after-effects of CapEx (Depreciation), but it does not deduct CapEx directly.

EBITDA deducts OpEx, but no CapEx (both the initial amount and the Depreciation afterward are ignored).

Net Income is similar to EBIT: it deducts OpEx and Depreciation, but not CapEx directly.

So, EBIT and Net Income are more useful if you want to reflect the company’s capital spending.

With EBIT under U.S. GAAP, there is a full deduction for Rent. Under IFRS, only the Depreciation element is deducted.

EBITDA under U.S. GAAP is the same: the full Rental Expense is deducted. But under IFRS, nothing is deducted because both the Interest and Depreciation elements are added back or excluded when calculating EBITDA.

Net Income has a full deduction of the entire Rental Expense under both major accounting systems.

If you’re comparing U.S. and non-U.S. companies, you should use EBITDAR to normalize and make a proper comparison: 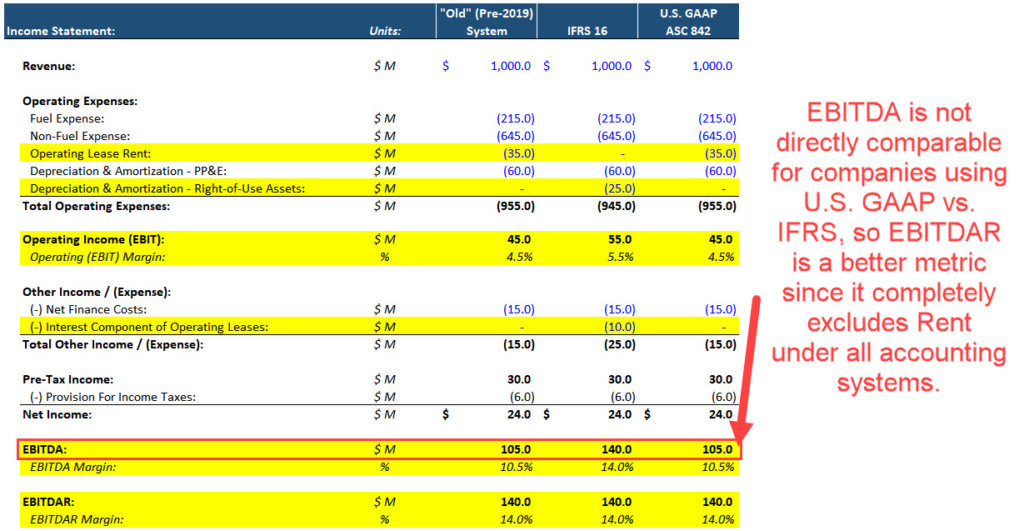 EBIT completely ignores or “adds back” Interest, Taxes, and Non-Core Business Income. EBITDA is the same.

But Net Income is the opposite – it deducts Interest and Taxes, adds Non-Core Income, and subtracts Non-Core Expenses.

This difference is one big reason why Net Income is not so useful when comparing different companies – there are too many differences due to capital structure, side businesses, tax treatments, and so on.

Both EBIT and EBITDA pair with Enterprise Value to create the TEV / EBIT and TEV / EBITDA valuation multiples, respectively.

You do have to be careful with Lease-related issues, and EBIT, as traditionally calculated, is no longer valid under IFRS for use in the TEV / EBIT multiple.

Net Income pairs with Equity Value to create the P / E, or Price to Earnings, multiple.

For more, see our detailed guide to Enterprise Value vs. Equity Value.

Here’s a comparison table for these valuation multiples, using representative numbers from an airline company: 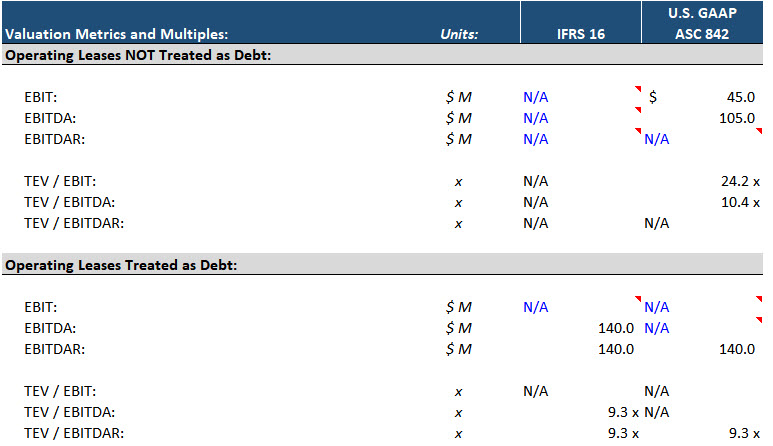 What EBIT vs EBITDA vs Net Income Represent

EBIT is often closer to Free Cash Flow (FCF) for a company, defined as Cash Flow from Operations – CapEx, because both EBIT and FCF reflect CapEx in whole or in part (but watch out for Lease issues!).

EBITDA is often closer to Cash Flow from Operations (CFO) because both metrics completely exclude CapEx.

You can see this in the calculations above for Target and Best Buy:

And Net Income is not great for comparisons or for approximating companies’ cash flows. It’s best as a quick and simple metric for quickly assessing a company’s profitability without doing extra work.

EBIT is best for companies highly dependent on CapEx; EBITDA is better for companies that are less so, or if you want to normalize/ignore CapEx and D&A.

But the problem is that Rent is still Rent under U.S. GAAP, but under IFRS, it’s split into “fake” Depreciation and Interest elements.

The company still pays the same amount of Rent, but it has to split it up artificially into Interest and Depreciation.

So, you must be careful to deduct either the entire Rental Expense, or none of it, in these metrics.

For example, with EBIT and EBITDA under U.S. GAAP, you should not add Operating Leases to TEV because both of these deduct the full Rental Expense.

But with EBITDA under IFRS, you should add Operating Leases to TEV because EBITDA excludes the full Rental Expense in that system.

This quick comparison table sums up the differences with Operating Leases:

EBIT vs EBITDA vs Net Income: Which Valuation Metric is Best?

This is a stupid question because it assumes that there is a “best” metric.

Each one tells you something different, which is why you want to look at more than one – to get the full picture.

With the EBIT vs. EBITDA choice, it depends on how you want to treat CapEx.

To completely ignore it, use EBITDA.

To factor it in, partially, use EBIT. Also, remember that EBIT isn’t valid in valuation multiples under IFRS, so you have to rely more on EBITDA and EBITDAR there.

Here’s a comparison table that shows all these differences for these metrics: 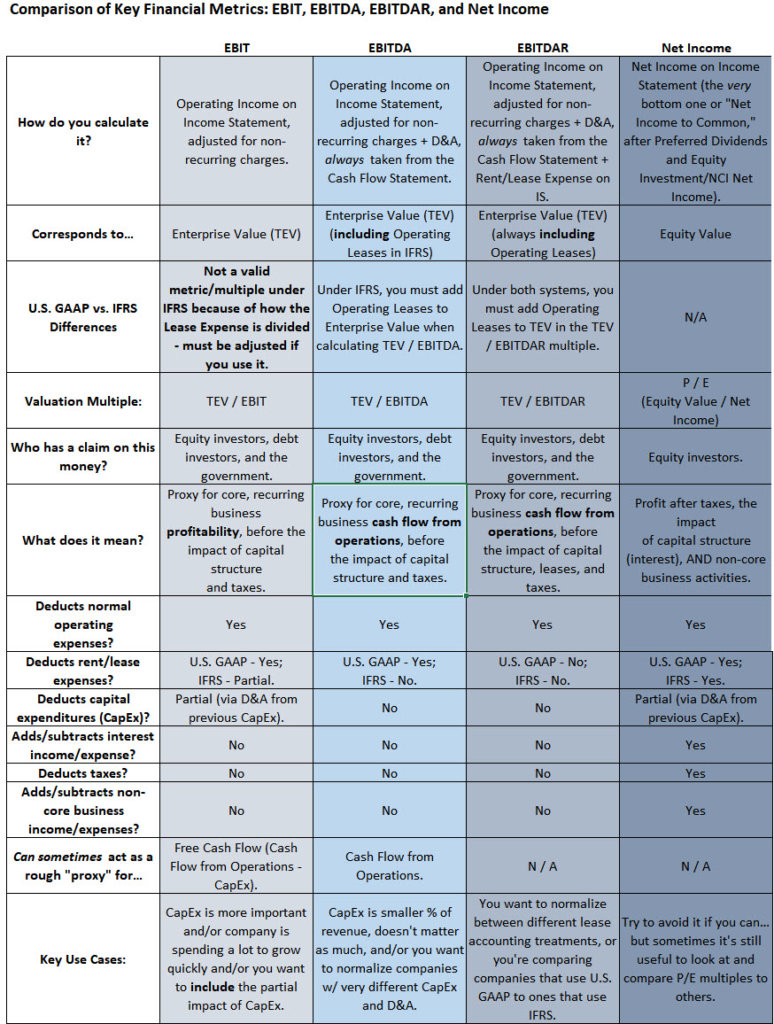