In this tutorial, you’ll learn how Net Operating Losses (NOLs) and Deferred Tax Assets (DTAs) change over time and how they flow through the financial statements.

For example, maybe the company received a service or product and listed the expense due to the accrual principle of accounting, but the company is delaying cash payment until the due date on the invoice.

The same scenario often happens with taxes, but the timing differences can happen over much longer time frames.

All large companies prepare two sets of financial statements: one for “Book” purposes (shown in annual and quarterly reports) and one for “Tax” purposes (for the government).

These sets of financial statements are similar, but not the same, for several reasons:

1) Companies may use accelerated Depreciation in earlier years to reduce their tax burden (and better reflect reality, in some cases).

2) Some expenses may not be deductible for tax purposes, even though they’re listed on the Income Statement.

3) The company might get tax credits from certain activities, such as research & development.

When one of these events happens, a line item that represents “tax timing differences” gets created.

It’s usually called Deferred Taxes, and it appears on the Cash Flow Statement within Cash Flow from Operations.

It represents the difference between the company’s Book Taxes (the tax number on the Income Statement) and its Cash Taxes (what the company pays to the government).

In the models on this site, we normally record Income Taxes on the Income Statement based on Pre-Tax Income * Tax Rate and then adjust them on the Cash Flow Statement to reflect the Cash Taxes.

A Deferred Tax Liability (DTL) on the Balance Sheet gets created when the company is expected to pay higher Cash Taxes than Book Taxes in the future.

This scenario often happens with accelerated Depreciation, where a company can deduct more Depreciation on its Capital Expenditure (CapEx) spending in the early years to reduce its tax burden.

In later years, however, it will not be able to deduct as much Depreciation for tax purposes, so its Cash Taxes will be higher than its Book Taxes.

Here’s a simple illustration of how the Deferred Tax Liability works with accelerated Depreciation: 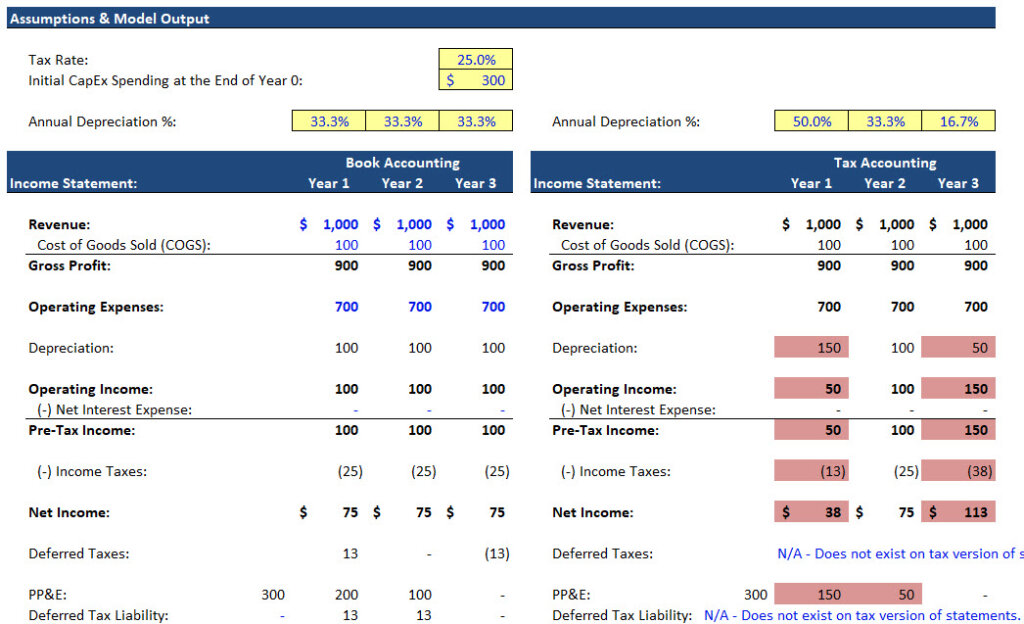 Deferred Tax Assets (DTAs) are for the opposite situation: they represent cases in which the company expects to pay less in Cash Taxes than Book Taxes in the future.

Deferred Tax Assets can include many items, but Net Operating Losses (NOLs) are the most important for financial modeling and valuation purposes.

If a company has lost money (i.e., it has had negative Pre-Tax Income) in previous years, it can reduce its Cash Taxes in the future by applying these losses to reduce its Taxable Income.

For example, consider a company that has had negative Pre-Tax Income in the past two years.

If this company then earns negative Pre-Tax Income again, it will once again accumulate Net Operating Losses. 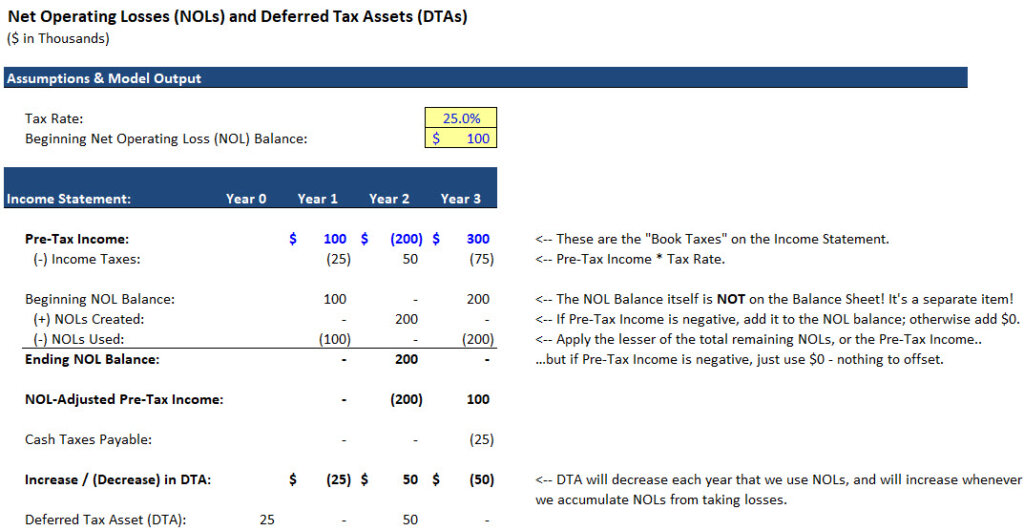 If the DTA decreases, the company’s cash flow increases because it’s using the NOL to reduce its taxes; if the DTA increases, cash flow decreases.

Note that Net Operating Losses are NOT the same as Deferred Tax Assets!

The DTA represents only the tax-savings potential from NOLs, so a $100 NOL would be recorded as a $25 DTA at a 25% tax rate.

The full NOL is an “off-Balance Sheet” line item.

One problem is that there are Deferred Tax Assets and Deferred Tax Liabilities on the Balance Sheet, but only one item on the Cash Flow Statement – Deferred Taxes – links into them.

We typically get around this issue by creating a single “Net Deferred Tax Asset” (Net DTA) line item by taking the DTA and subtracting the DTL (or saying that the Net DTL = DTL – DTA).

Here’s what the financial statements look like if the company experiences a loss one year, followed by an application of NOLs the next year: 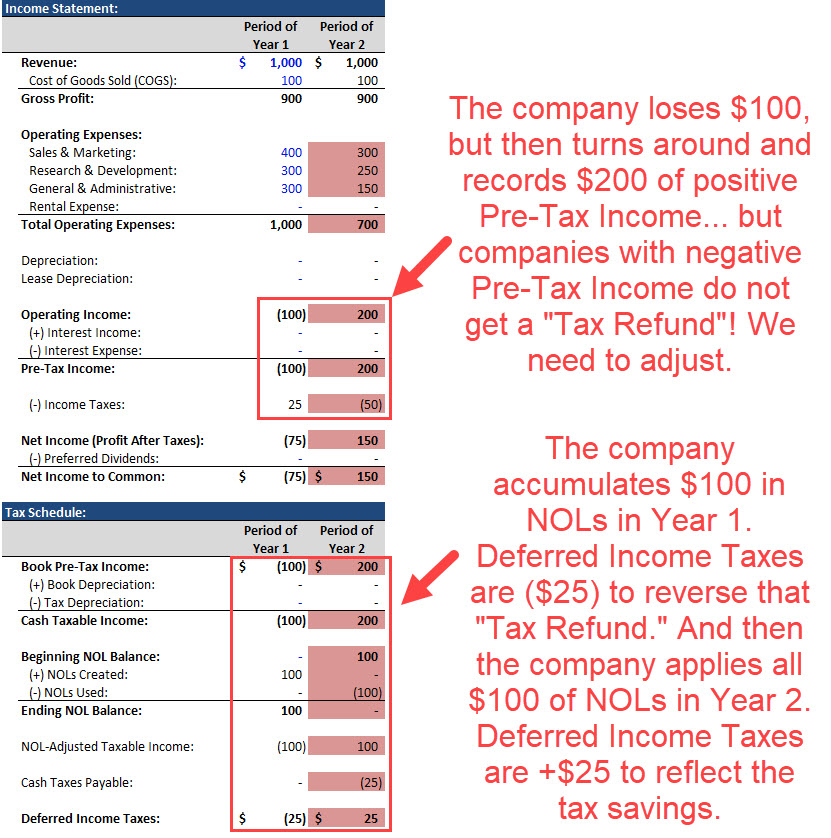 On the Cash Flow Statement, there’s a negative adjustment for Deferred Taxes in Year 1 and a positive one in Year 2, so the Net DTA on the Balance Sheet increases and then decreases: 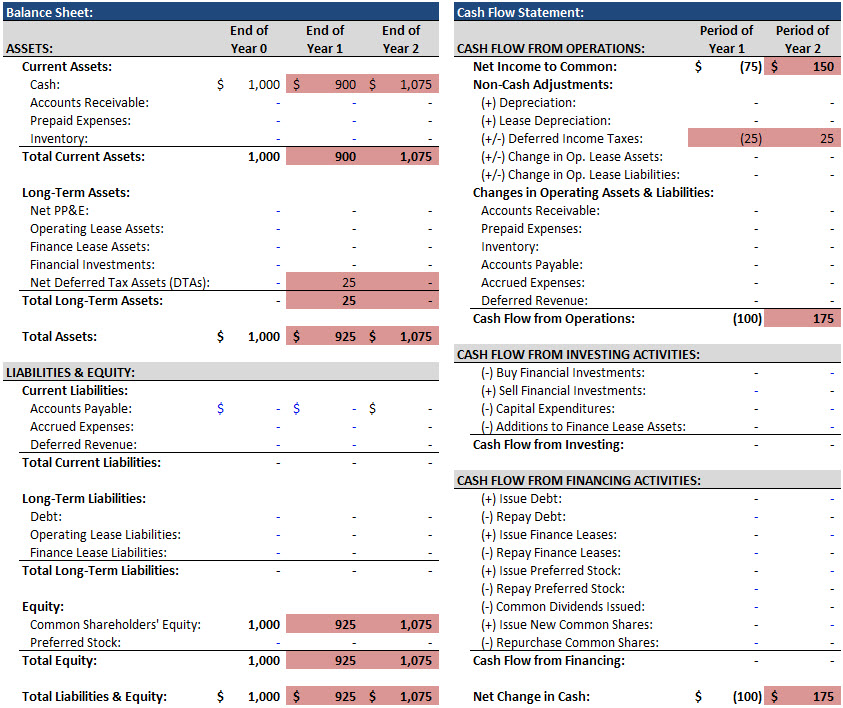 Why Do Deferred Tax Assets and Net Operating Losses Matter?

The short answer is that DTAs and NOLs are not that important for many companies.

For example, a mature, profitable, cash flow-positive services or transportation company is unlikely to have significant Net Operating Losses, so the examples above are not readily applicable.

On the other hand, a high-growth tech or biotech startup is far more likely to accrue significant Net Operating Losses because these companies tend to lose money for years or decades before becoming profitable.

If you’re analyzing a similar type of company, these line items matter because:

1) A huge Net Operating Loss balance means the company may not pay Cash Taxes for many years into the future. This will affect your 3-statement model, DCF model, and specific metrics like Unlevered Free Cash Flow. There’s an example in our Uber valuation.

2) Also, when you calculate Enterprise Value, you’ll have to include the Net Operating Losses as a Non-Operating Asset, typically by subtracting the NOL Balance * Tax Rate along with the other items you subtract in the calculation, such as Cash and Investments.

For more on this point, please see our tutorial on Section 382 limitations in M&A deals.

In short: Net Operating Losses and Deferred Tax Assets are non-existent or not meaningful for many companies. But when a company has a huge NOL balance, these items matter a lot in everything from 3-statement models to valuations to M&A deal analysis.

This tutorial is a small taste of the knowledge you’ll learn in our paid courses. Breaking Into Wall Street uses real-life modeling tests and interview case studies to prepare you for investment banking and private equity interviews – and a leg up once you win your offer and start working. Find out more about our advanced training by via the button below: