In this third free tutorial, you’ll learn what Terminal Value means in a DCF, how to calculate and cross-check it, and how to use it to finish the Discounted Cash Flow Analysis and draw initial conclusions about Michael Hill’s implied value.

As with the previous two lessons, everything here goes back to the big idea about valuation and the most important formula in finance:

Put simply, this “Company Value” is the Terminal Value!

So, it’s not quite as easy as just looking at a DCF and inputting all the numbers straight from there.

In an Unlevered DCF, this all-important formula becomes:

You rarely forecast the actual Terminal Period in a DCF, so you often project just the Unlevered FCF in Year 1 of the Terminal Period and use this tweaked formula instead: 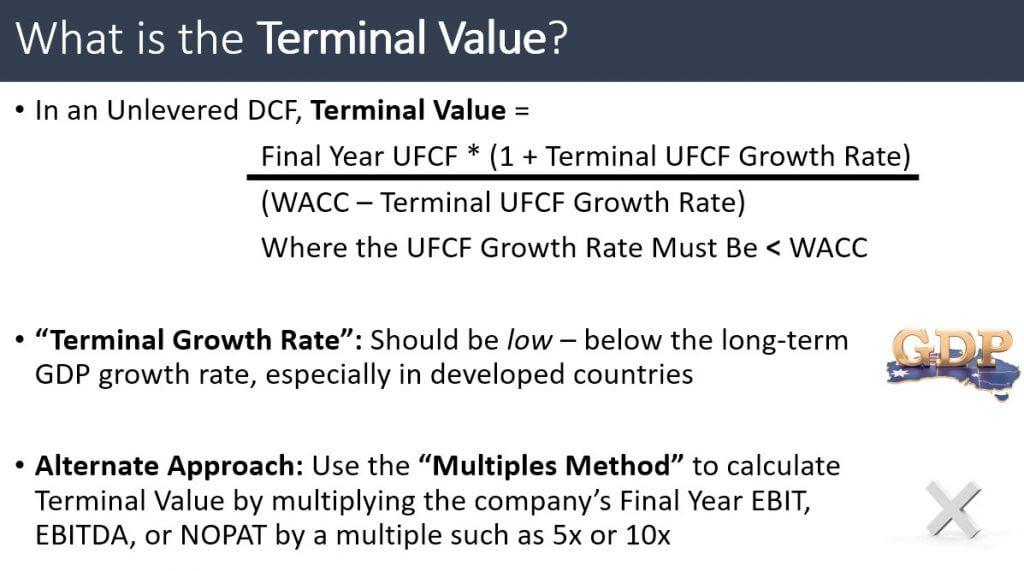 As shown in the slide above, this “Terminal Growth Rate” should be low – below the long-term GDP growth rate of the country, especially in developed countries such as Australia, the U.S., and the U.K. You might use numbers such as 1%, 2%, or 3%, depending on the region.

You can also calculate the Terminal Value with the Multiples Method and multiply the company’s final-year EBITDA, EBIT, or NOPAT by a valuation multiple, such as 5x or 10x: 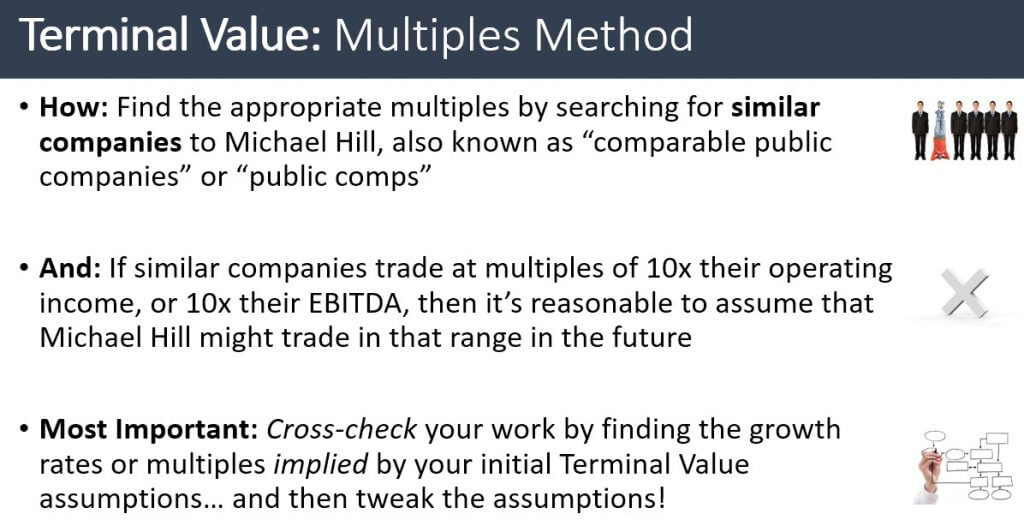 You can find the appropriate multiples by searching for similar companies to Michael Hill, also called “comparable public companies” or “public comps.”

If similar companies trade at multiples of 10x their operating income or 10x their EBITDA, then it’s reasonable to assume that Michael Hill might trade in a similar range in the future.

You can use either method, or both methods, to estimate Terminal Value, but the important part is what comes next: once you have your initial estimate, you must cross-check it by entering the numbers in Excel and looking at the growth rate or multiple implied by your initial guess.

Then, you need to tweak the assumptions a bit to make sure the implied growth rates and multiples make sense.

Once you’ve tweaked your assumptions, you then discount this Terminal Value to its Present Value, add it to the Present Value of the Unlevered Free Cash Flows, and then back into the company’s Implied Share Price from there.

And then at the end, you can set up sensitivity tables to look at this number in different cases and see the full range of values the company might be worth.

How to Calculate Terminal Value in Excel: Picking the Right Numbers

You start by looking up data on the expected long-term GDP growth rate in the company’s country and the range of forward EBITDA multiples for the comparable public companies.

Then, you make initial guesses for the Terminal FCF Growth Rate and the Terminal Multiple that are slight discounts to these numbers.

For example, if long-term GDP growth is expected to be 2-3%, you might pick 1-2% for the Terminal FCF Growth Rate.

If the comparable companies trade at EBITDA multiples of 8-10x, you might pick 6-7x for the Terminal Multiple.

Here, it’s safe to say that Australia’s long-term GDP growth will be between 2% and 3%:

And then we look at the comparable public companies for Michael Hill and see that the median forward EV / EBITDA multiple is 7.7x:

The Implied Terminal EBITDA Multiple is easy – divide the Terminal Value from the Perpetuity Growth Method by the Final Year EBITDA.

The Implied Terminal FCF Growth Rate is more difficult because you must use algebraic manipulation to flip around the equation and solve for the growth rate if you have everything else. After rearranging the equation, it comes out to:

You can see the full derivation in these slides.

You tweak these assumptions until you get something reasonable for the Terminal FCF Growth Rate and the Terminal Multiple (or just one of them if you’re calculating Terminal Value using only one method).

In this case, our initial guesses are reasonable because the implied growth rate and multiple both make sense:

Terminal Value represents Michael Hill’s implied value 10 years in the future, from that 10-year point into infinity – so, we need to discount that to what it’s worth today, i.e., the Present Value.

This represents the value of the company’s core-business Assets to all investors in the company, but since Michael Hill is public, we want to find its value on a per-share basis – which means that we need its Implied Equity Value as well.

Since Equity Value represents the value of all Assets but only to common shareholders, we move to Implied Equity Value by adding non-core-business Assets and subtracting items that represent other investor groups: 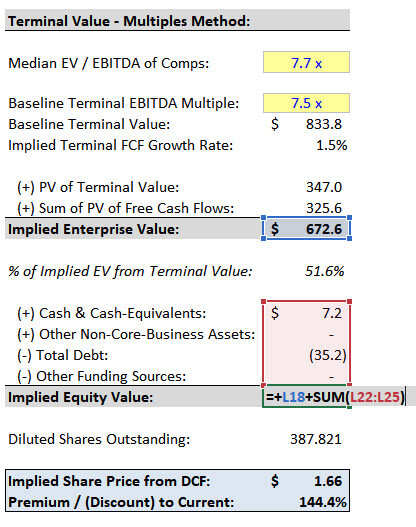 Once we have the Implied Equity Value, we then divide by the share count to get the company’s Implied Share Price and calculate the premium or discount to the current share price from that.

In this case, the DCF shows a premium of nearly 150%, which indicates that the company may have been dramatically undervalued by the public markets as of the time of this case study.

With WACC, we generally want our actual value of 9.16% to be in the middle of the range and to go up and down based on the range of values we found in the Discount Rate calculations. So, maybe 8.8% – 9.4%, but we want to make it a bit wider than that to span at least ~2%.

With the Multiples and Growth Rates, it’s a similar concept – our actual value should be in the middle of a range of plausible values. So, maybe 7-8x for the multiples and 1-2% for the growth rates; we go a bit smaller than those to fit the tables:

We then link to the Implied Share Price cells in the top left-hand corner of both tables, and create the sensitivity tables with Alt, D, T. If this doesn’t work for you, go into Options (Alt, T, O), Formulas, and set Workbook Calculations to “Automatic” or just press F9 to refresh the spreadsheet.

We can look at the football field valuation chart to get a quick answer to this one: 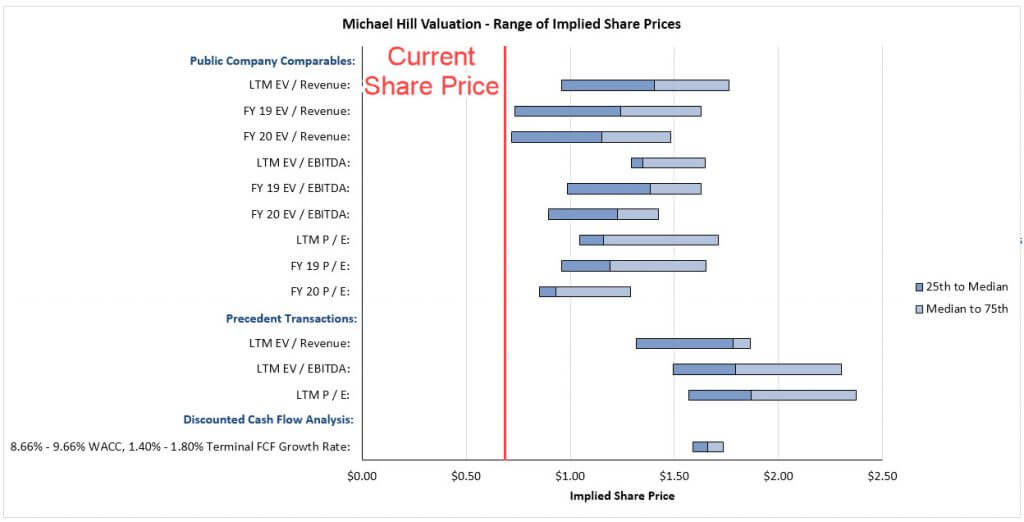 Yes, by any metric, this company seems extremely undervalued as of the time of this case study – we never even get close to its current share price of $0.68, let alone $1.00.

The other valuation methodologies confirm this finding.

However, we’re not certain that it’s undervalued by 150% because it’s not clear that we’ve handled the exit of its U.S. business correctly.

For example, are any of the Assets on MHJ’s Balance Sheet for “Discontinued Operations”? What are the remaining costs to shut down the U.S. segment? Even with all that, the company is still probably undervalued, but we don’t know by how much.

Our best guess is that it’s probably more like 30-50% undervalued – and we also haven’t looked at other cases/scenarios here, such as a prolonged restructuring or an economic downturn in the ANZ markets (and Canada!).

Given the current valuation, it’s not a great idea to pursue a sale of the company now since it’s quite undervalued, and public companies are sold based on premiums to their current share prices.

Getting a premium above 20-30%, or even up to 50%, is highly unlikely, so Michael Hill would be unlikely to receive anything close to what it’s worth.

Raising debt might make more sense if the company needs it to open more stores or buy smaller companies, but we think the best option, for now, is to focus on organic growth and prove that it has exited the U.S. successfully and turned itself around.

Once it has done that, management should think about expanding the store count or pursuing debt-funded add-on acquisitions.

Premium Course Signup
This website and our partners set cookies on your computer to improve our site and the ads you see. To learn more about
what data we collect and your privacy options, see our privacy policy.I Understand