ROIC vs ROE and ROE vs ROA: Key Financial Metrics and Ratios (24:12)

ROIC vs ROE and ROE vs ROA: Learn how these key financial metrics differ, what they tell you about companies, and how you can use them to analyze and invest in companies.

ROIC vs ROE and ROE vs ROA: Why Do These Metrics and Ratios Matter?

Metrics such as ROE, ROA, and ROIC let you evaluate and compare different companies and see why one company might be worth more and trade at higher valuation multiples than others.

They let you answer questions such as:

The Calculations for ROE, ROA, and ROIC

You can see example calculations for Walmart below: 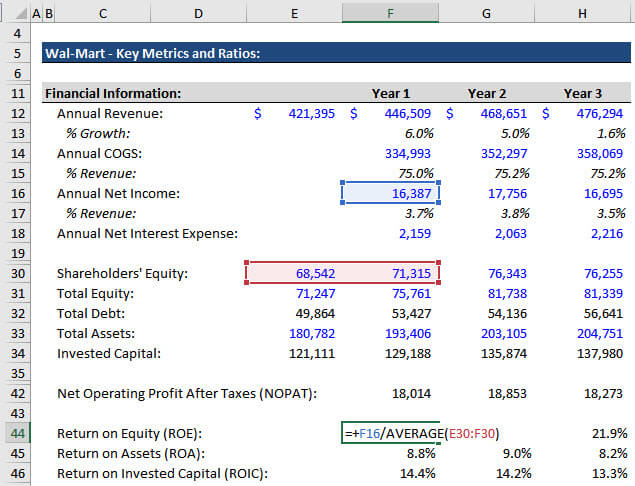 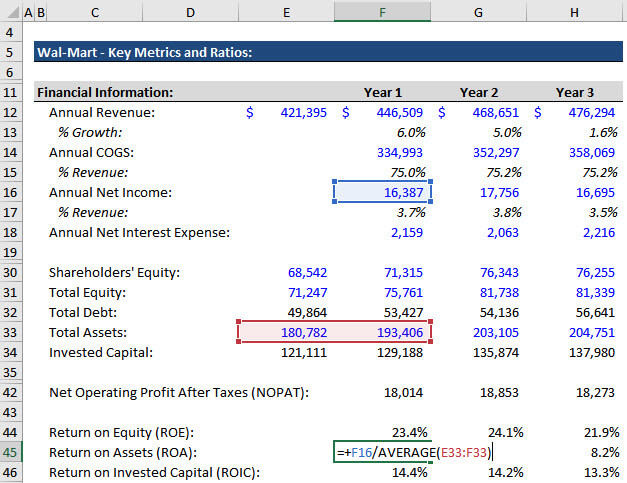 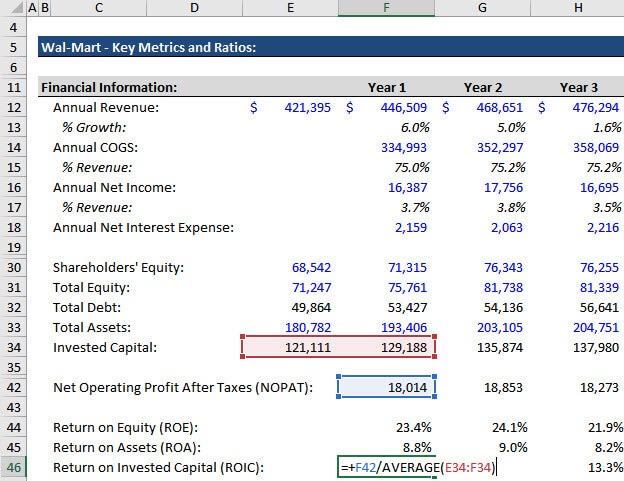 You can find Net Income, Shareholders’ Equity, Total Assets, and the component of Invested Capital on Walmart’s Balance Sheet.

NOPAT stands for Net Operating Profit After Taxes, and you calculate it by taking Walmart’s Operating Income and multiplying by (1 – Tax Rate).

NOPAT represents what the company’s core business generates in after-tax profits on a capital-structure-neutral basis, which means that you ignore Debt, Cash, Investments, and anything else that affects Interest Income, Interest Expense, Preferred Dividends, and so on.

You can take Operating Income from the company’s Income Statement and estimate its Tax Rate based on Income Taxes / Pre-Tax Income.

What do these metrics tell us for Walmart?

By themselves, not a whole lot.

They’re all fairly high because few companies in any sector have an ROE of nearly 25%, and ROA of close to 10%, and an ROIC of nearly 15%.

But to say anything more, we need to compare Walmart to other companies.

We’ll do that below for Walmart, Amazon, and Salesforce to understand how these metrics differ for a software and “software-enabled” retailer.

ROIC vs ROE and ROE vs ROA for Walmart, Amazon, and Salesforce

Here are the numbers for these three companies: 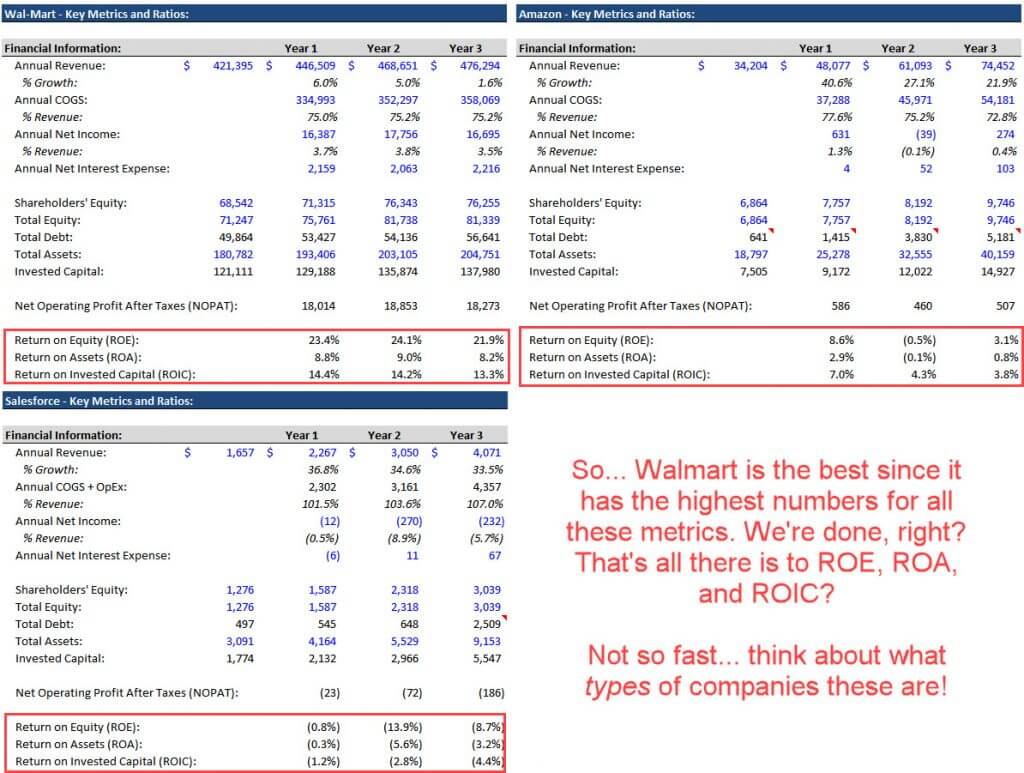 On the surface, many of these metrics make Walmart seem like a “better” company – it has much higher ROE, ROA, and ROIC, and Amazon is negative on some of those!

Walmart tends to have higher margins as well, and it shows more consistency with those margins.

And then if you consider other metrics, like the Change in Working Capital, Walmart seems to collect cash from customers and pay invoices more quickly than Amazon.

The Punchline: Despite all that, Amazon traded at much higher multiples than Walmart at the time of this analysis, and so did Salesforce.

Because Amazon and Salesforce were high-growth companies valued for their growth potential, and Walmart was not.

Walmart was a mature, stable, company growing at single-digit percentages each year.

For a company like that, investors care a lot about how efficiently it is using its capital, equity, and assets to generate after-tax profits.

But investors who buy into firms like Amazon or Salesforce do not care about near-term profits, but rather their long-term growth potential.

So, in short: it all goes back to that Revenue Growth line in the screenshots above.

ROIC vs ROE and ROE vs ROA: How to Make a More Meaningful Comparison

These metrics are most useful when comparing companies of similar sizes, growth rates, and margins – they’re not as useful when you’re comparing a high-growth company to a stable, mature firm.

So, in this case, we should be comparing Walmart to companies like Costco, Target, and Kroger to make a proper comparison.

While those companies are smaller than Walmart, they’re the same type of company: mature, stable, diversified retailers with limited growth potential.

We made this comparison at another point in time – so the numbers are different from the ones above – and found the following stats for ROE, ROA, and ROIC:

By looking at these metrics for companies that are similar to Walmart, we get a very different picture: it’s pretty much average among its peers, at least in terms of ROA and ROIC.

In other words, it doesn’t deserve to be valued at a premium to these other mature retailers based on its financial performance. It’s not using its Assets or Invested Capital more efficiently, and it doesn’t have some huge financial advantage over them.

Walmart’s ROE metric is distorted by a one-time Loss it recorded in this fiscal year, but if we ignore that, its ROE would be in the 20-25% range. So… pretty much average.

But Which of These Returns-Based Metrics is “Best”?

Each one tells you something a bit different, but in our view, ROIC is the most useful all-around metric because it reflects all the investors in the company – not just the equity investors (common shareholders).

For example, if you make the ROIC vs ROE comparison, companies can distort their ROE by using leverage (Debt) and “playing games” with their Debt / Equity ratios.

But that can’t happen with ROIC because it reflects all the capital a company has on its Balance Sheet.

Also, ROIC is useful because you can compare it to WACC, the Weighted Average Cost of Capital, and see how well a company is performing against investor expectations for it.

ROE is most useful for firms like commercial banks and insurance companies that do not split their assets into the operational vs. non-operational categories – for those firms, Net Income is a critical metric that reflects their full business results.

ROA, similarly, tends to be most useful for commercial banks and insurance firms that depend entirely on their Balance Sheets to generate income.

In addition to the returns-based metrics above, there are also a few useful ones based on other items on companies’ financial statements:

How dependent is a company on its asset base to generate revenue?

How many times per year does a company sell off all its Inventory?

How quickly does a company collect its receivables from customers that haven’t paid in cash yet?

How quickly does a company submit cash payment for outstanding invoices?