In this tutorial, you’ll learn about the mid-year convention in DCF models, as well as stub periods, and how to combine these concepts in the FCF projections and Terminal Value calculations.

Mid-Year Convention Definition: When you use the mid-year convention in a discounted cash flow (DCF) analysis, you assume that the company’s cash flows arrive halfway through each year rather than at the end, more accurately reflecting reality and boosting the company’s implied value in the DCF.

The mid-year convention is an additional feature of DCF models often used by investment banks and equity research teams.

Click here to get a sample Excel file with a simple DCF model that illustrates the mid-year convention.

You can see how it differs from the “standard convention” below:

In a standard DCF model, you project a company’s Unlevered Free Cash Flow over 5-10 years, estimate its Terminal Value at the end of that period, and discount everything to Present Value.

When you discount the company’s future cash flows to their Present Value, you use periods such as 1, 2, 3, and 4 in a standard DCF analysis:

In other words, to calculate the Present Value (PV) of a Free Cash Flow generated in Year 3, you use this formula:

You can see this formula in Excel in the image below:

But that’s not accurate because a period of “3.000” implies that all the company’s FCF in Year 3 is generated at the end of Year 3.

In reality, though, the company generates cash flow every day, and on average, that cash flow is distributed throughout the year (with exceptions for highly seasonal companies).

Using these discount periods in a DCF is known as the “Mid-Year Convention” because you’re assuming that the cash flows arrive midway through each year.

The company’s Implied Value increases because the cash flows arrive earlier, and money today is worth more than money tomorrow.

To implement the mid-year convention, you discount each cash flow manually using the Present Value formula above, with discount periods based on 0.5 rather than whole numbers.

Here is the traditional method vs. the Mid-Year Convention:

The PV of each Unlevered Free Cash Flow increases because it’s generated earlier.

How the Terminal Value Changes with the Mid-Year Convention

If you use the Multiples Method to calculate the Terminal Value in a DCF (e.g., assign a Terminal EBITDA Multiple to the company’s EBITDA in its final projected year), nothing changes.

That’s because the Terminal Multiple always applies to the company’s financial metrics in the final projected year at the end of that year – regardless of when the cash flows in the projected period are generated.

Under this method, the Terminal Value is based on the company’s cash flows, and with the mid-year convention applied, these cash flows are generated halfway through each year.

Therefore, if the DCF projection period is 10 years, the Terminal Value is as of Year 9.5 rather than Year 10.0 under the mid-year convention and the Perpetuity Growth method.

So, you use 9.5 rather than 10.0 in the Present Value formula, resulting in a higher implied value: 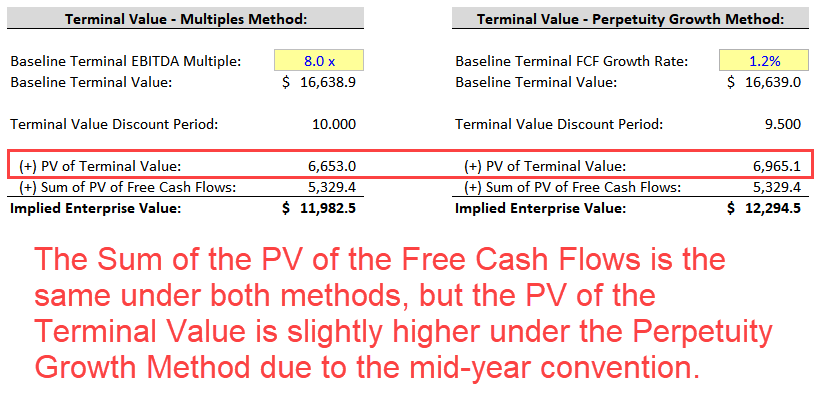 You could adjust these calculations to make them comparable, but it’s rarely the time and effort since the discrepancy is small (~2-3%).

Should You Always Use the Mid-Year Convention?

While many banks use the mid-year convention in DCF models, it is not always appropriate.

For example, if a retailer earns most of its sales in Q4 of the year due to the holiday shopping season, the bulk of its Free Cash Flow probably is generated at the end of the year.

You would not want to use 0.5, 1.5, 2.5, etc., for the discount periods because this company’s sales and FCF are not evenly distributed over the entire year.

The Mid-Year Convention with Stub Periods

When you value a company, much of its cash flow for the first projected year has already been generated (unless you’re valuing it on January 1).

So, you should reduce the cash flow for Projected Year 1 by the amount that the company has already generated.

But you also need to change the discount periods because April 30 to December 31 represents about 2/3 of the year.

This interval between April 30 and December 31 is called the stub period.

To determine the discount period for this stub period, you take the remaining days of the year and divide by the total days in the year.

You subtract the already-generated cash flow only in the first period.

The projected cash flow in all the subsequent years is the same because no cash flow for Years 2, 3, and beyond has been generated as of April 30 of Year 1.

You can also combine the stub period with the mid-year convention.

If you do this, the first discount period will be the stub period fraction divided by 2.

By doing this, you’re assuming that the cash flow arrives midway between today – April 30 – and the end of the year – December 31.

In each period AFTER that first one, you take the normal discount period and subtract 0.5.

Here are the normal and mid-year discount periods for a valuation date of April 30:

You do NOT keep dividing the “Normal Discount Period” by 2 – that’s only in Year 1!

If you divided the Year 2 “Normal Discount Period” by 2, you’d be assuming that the Year 2 cash flow arrives midway between April 30 of Year 1 and December 31 of Year 2.

In other words, you’d be incorrectly assuming that the Year 2 cash flow arrives on March 1 of Year 2.

But that’s not what happens!

Assuming that the Year 2 cash flow is evenly distributed, it should arrive on June 30 of Year 2 –  midway through that year.

By using the correct discount period of 1.171 for Year 2, you’re saying:

That produces 2.171 for the mid-year discount period for Year 3, as shown above.

This stub period affects the PV of Terminal Value calculation because it reduces the time between today’s date and the end of the projection period.

So, if the stub period is 0.671, as in the example above, and you’re not using the mid-year convention, you use 9.671 rather than 10.000 to discount the Terminal Value under both methods:

But if you use the stub period and the mid-year convention together, the discount periods are as follows:

Once again, you need to “move back” half a year under the Perpetuity Growth Method since it’s based on the company’s cash flows, which arrive halfway through each year under the mid-year convention.

You can see the impact below: 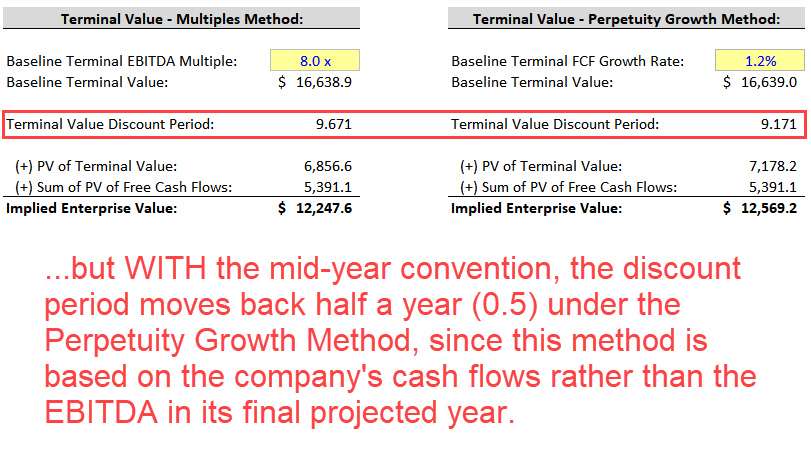 The Mid-Year Convention and the Stub Period in a DCF: Final Thoughts

If you find these concepts confusing, we recommend skipping them and simplifying your models.

The mid-year convention will never change the results of a DCF by more than a few small percentage points.

Stub periods can potentially make a bigger difference, but they are unlikely to do so for most standard companies.

They would matter if something unusual happened in the first portion of the first projected year that is not expected to recur in the second portion, such as a significant acquisition or divestiture.

These features are bells and whistles in the DCF: nice to have but not essential in making investment decisions or client recommendations.

Finally, these topics are unlikely to come up in interview questions unless you’ve had significant work experience or financial modeling exposure.