In this tutorial, you’ll learn what “Original Issue Discount” or OID on Debt issuances means, and how it works on the financial statements.

A company might do this, or have to do this, because:

When a company issues a bond at a discount to par value, the company amortizes this discount on the financial statements and increases the Book Value of Debt on the Balance Sheet until it reaches Par Value upon maturity.

In the example above, for Debt with a Face Value of $100, a 10% Coupon Rate (i.e., a fixed interest rate of 10%), a 5-year maturity, no principal repayments until maturity, and an Original Issue Discount of $10:

On the Balance Sheet, the company initially records Debt of $90 (its Book Value, which equals Face Value – Original Issue Discount), and it increases this number by $2 per year as the OID amortizes.

The company still pays Interest based on this $100 Face Value, so the Cash Interest stays the same each year because the Face Value and Coupon Rate are both fixed.

On the Income Statement, both the Interest Expense and Amortization of OID appear under the “Interest Expense” category ($12 in total), which reduces Pre-Tax Income, Taxes, and Net Income.

Here it is in Excel: 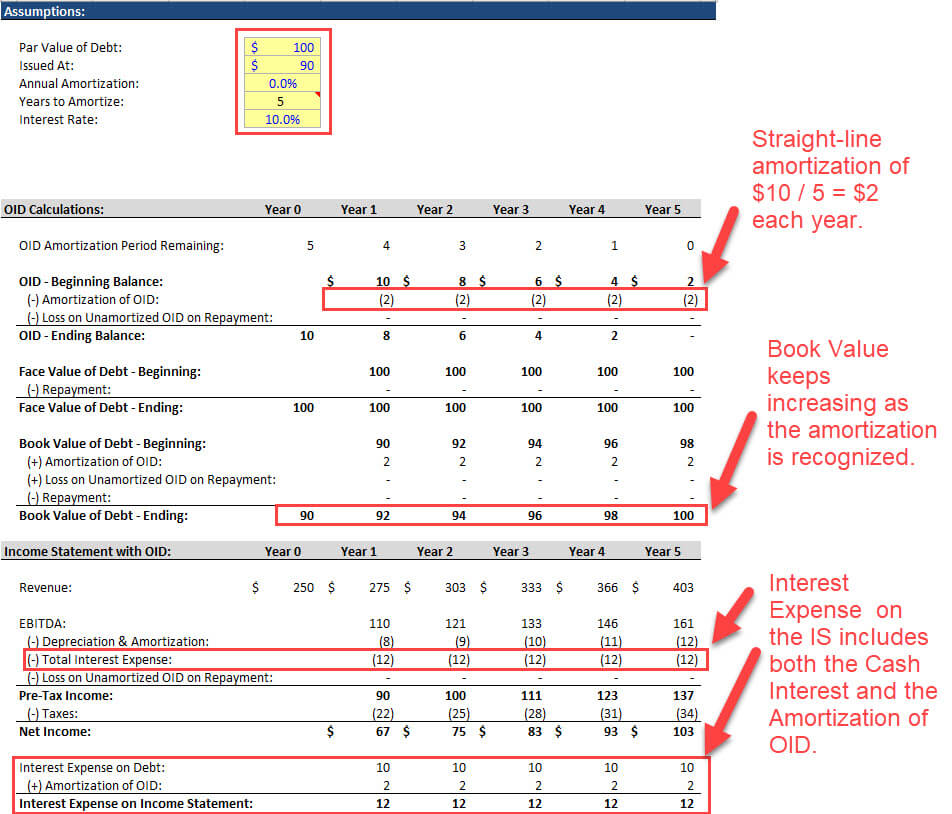 On the Cash Flow Statement, Net Income is slightly lower as a result of the Amortization of OID, but since it is a non-cash expense, similar to Depreciation, we add it back in Cash Flow from Operations:

If this company had issued the Debt at a Book Value of $100 – no OID – rather than $90 – here’s how Free Cash Flow would have changed:

If there are Mandatory or Optional Repayments on the Debt, you must amortize the OID more rapidly, which is slightly more complicated to model.

So, for example, if we assume the following:

Here’s what it looks like in Excel if we assume the same OID Discount of $10, Annual Amortization of 20%, a 5-year maturity, and a Fixed Coupon Rate of 10%: 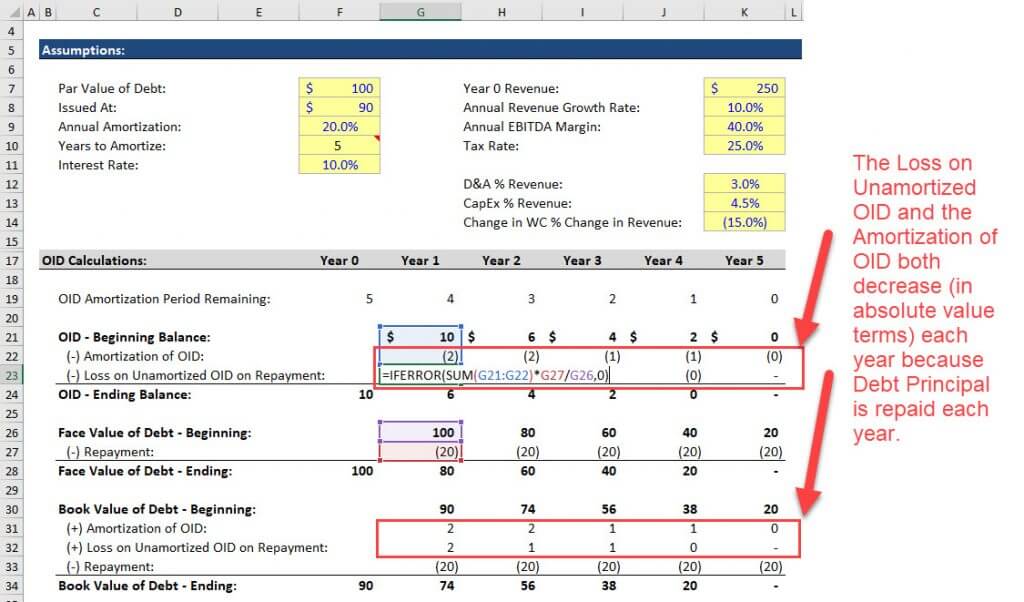 The Amortization of Original Issue Discount itself also changes in this scenario.

So, with OID of $10 and a 5-year period, this will initially be $10 / 5 = $2. But it will fall to less than $2 by the end because the OID Balance and OID Amortization Period keep decreasing.

On the financial statements, the “Loss on Unamortized OID on Repayment” counts as another expense on the Income Statement.

Cash Interest, OID Amortization, and the Loss on Unamortized OID on Repayment all reduce the company’s Pre-Tax Income, Taxes, and Net Income:

On the Cash Flow Statement, Net Income is lower, and you add back the Amortization of OID and the Loss on Unamortized OID on Repayment since they’re both non-cash expenses:

These items boost the company’s Free Cash Flow because they’re non-cash items that reduce the company’s taxes, similar to Depreciation.

Advanced Note: In reality, these items may not actually boost FCF with everything factored in because they may not be deductible for cash-tax purposes.

In that case, there will be a negative adjusting line item for Deferred Taxes that reduces the company’s FCF and eliminates the tax savings from these items shown on the Income Statement.

However, this is an advanced point that we don’t recommend bringing up in an interview context unless you want to go down the “rabbit hole” of tax-related questions.

In most cases, no, not really.

Most Debt is not issued at a huge discount to par value; the 1-3% range is typical in normal markets.

The company may save a tiny amount on taxes as a result, especially in countries with relatively low corporate tax rates (15% – 25%) …and it takes a lot of extra work to set up these OID calculations, especially if there are many tranches of Debt.

It does not factor into financial statement analysis or metrics such as ROIC vs ROE in a major way, and it does not contribute to items like the Change in Working Capital.

So, be familiar with OID, but don’t obsess over it. You could easily simplify or ignore it in case studies and modeling tests and be fine.

Finally, if you can’t fall asleep and you need the equivalent of a sleeping pill, check out the IRS guide to OID instruments for more details.