In this first free tutorial, you’ll learn the big idea behind valuation and DCF (Discounted Cash Flow) Analysis, as well as how to calculate Unlevered Free Cash Flow and project it for a specialty retailer (Michael Hill).

The Big Idea Behind Valuation and DCF Analysis

You can use this formula to value any company or asset:

The “Cash Flow” parts are intuitive because they’re similar to earning income from a job in real life and then paying for your expenses – they represent how much you earn in cash after paying for expenses and taxes.

If a company’s Discount Rate and Cash Flow Growth Rate were to stay the same forever, then investment analysis would be very simple: just plug the numbers into this formula, see how much the company is worth, and compare that to the company’s current value.

But that never happens!

Companies grow and change over time, and often they are riskier and have higher growth potential in earlier years, and then they become less risky later.

Valuation is more than this simple formula because we must project changes in the Discount Rate and Cash Flow Growth Rate.

And there are two ways you can do that by extending this simple formula into “real” valuation.

First, you can project a company’s cash flows until it reaches maturity over 5, 10, 15, or even 20 years, and then keep its Discount Rate and Cash Flow Growth Rate the same after that in the “Terminal Period.”

Then, you add up the values in each period to get the company’s total implied value.

This is known as “Intrinsic Valuation,” and the Discounted Cash Flow Analysis is the best example.

A second approach is to use “valuation multiples” as shorthand, skip these long-term projections, and value a company based on what other, similar companies in the market are worth.

These tutorials focus on the first approach because it’s more interesting to demonstrate, and it’s more important in finance interviews.

The first step of this approach – the DCF Analysis – is to project the company’s Cash Flows.

There are many types of “Cash Flow,” but in a DCF, you almost always use something called Unlevered Free Cash Flow: 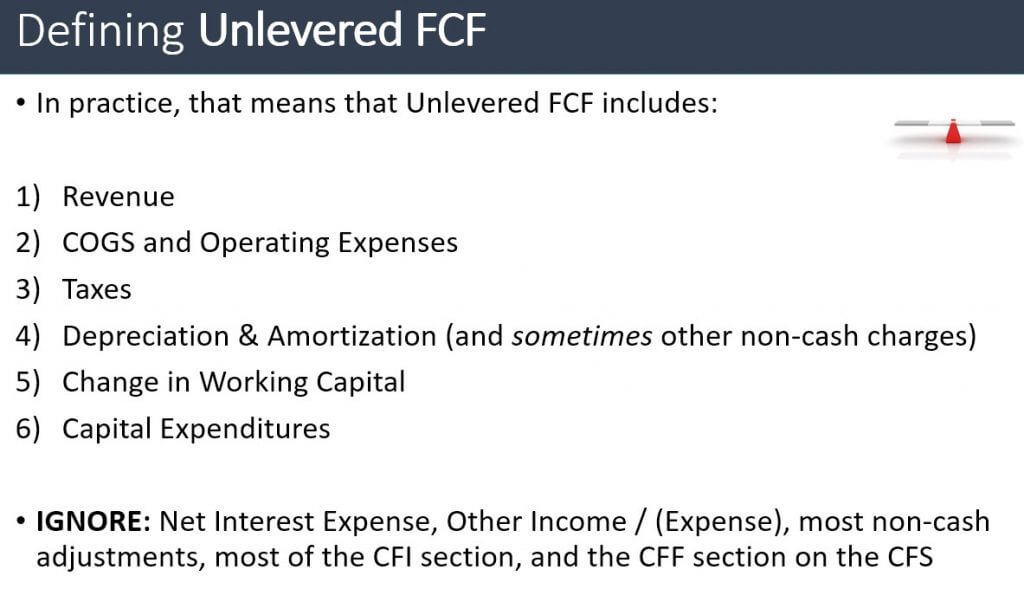 Unlevered FCF should reflect only items on the financial statements that are “available” to all investors in the company, and that recur on a consistent, predictable basis for the core business.

In practice, that means that Unlevered FCF should include only Revenue, Cost of Goods Sold, Operating Expenses, Taxes, Depreciation & Amortization and sometimes a few other non-cash adjustments, the Change in Working Capital, and Capital Expenditures.

The scenario here is that Michael Hill’s share price has fallen by a huge amount over the past year (~50%) as it has announced plans to exit the U.S. market and its Emma & Roe stores.

Management believes the company is now significantly undervalued, and has called in your firm to value the company and advise on their best options.

Revenue for a retailer depends on the # of stores and sales per store, and contributions from other channels such as e-commerce.

We break Michael Hill’s revenue into regions: Australia, New Zealand, and Canada, because Australia and New Zealand (ANZ) are more mature and have lower growth potential.

The store count expands slightly in both regions, but it expands far more in Canada, going from 83 to 100 over the period shown here.

Sales per Store initially increase at 6.5% per year in Canada but fall to 3.0% by the end; ANZ start off with negative growth, but recover and eventually slow down to ~2-3% annual growth.

Revenue for each segment equals the average number of stores in the segment times the Sales per Store for the year:

The margins for ANZ here dip slightly in the first two years and then recover and rise to levels consistent with their historical figures (15.5% for Australia and 22.5% for New Zealand).

For Canada, the margins gradually rise from ~11% to the ~15% level as growth slows down far in the future.

“Corporate Overhead” is for everything outside the individual stores, such as the headquarters, CEO, accountants, marketing team, etc., and it’s a simple % of revenue here.

Capital Expenditures (CapEx) represent purchases of long-term items that will last for more than 1 year and benefit the business for many years to come.

It’s split into Growth CapEx for new stores here, based on the # of new stores and an annual cost to open each new store, and Maintenance CapEx for maintaining and upgrading existing stores. Spending in both categories increases over time at low single-digit rates.

You can see a summary of the expense projections here:

How to Calculate Unlevered Free Cash Flow: Putting Together the Full Projections

And we know that NOPAT = EBIT * (1 – Tax Rate). This represents the company’s earnings from core business after taxes, ignoring capital structure.

First, we need to sum up Revenue and EBIT by looking at all the segments and converting the Canadian Dollars (CAD) and New Zealand Dollars (NZD) back into Australian Dollars (AUD) based on the assumed exchange rates.

Then, we do the same thing for EBIT and convert each region’s EBIT into AUD and subtract the Corporate Overhead expense.

Depreciation & Amortization represents the recognition of previous CapEx spending over many years; we make sure it stays slightly under CapEx since the company is still growing, even near the end of the period.

We add this to NOPAT since it’s a non-cash expense that reduced EBIT before and saved the company on taxes.

Deferred Income Taxes represent differences between taxes on the Income Statement and what the company actually pays in cash.

It fluctuates a lot here, so we just make it a low percentage of Taxes and record a modest Cash Tax Benefit for the company. This one could increase or reduce UFCF, but here, it increases it.

The Net Change in Working Capital relates to timing differences between recording revenue and receiving it in cash, and recording expenses and paying for them in cash.

For example, if a customer pays, but not in cash right away, but still gets the product, the company lists it as “revenue,” even though its cash balance has not gone up.

The Change in WC tends to reduce cash flow for retailers that must order products before selling them (Inventory), but it often increases cash flow for companies that collect cash in advance.

It fluctuates a lot here, so we just use simple, low percentages (25-30% of the Change in Revenue) to project it.

It’s also unusual that this is positive for a retailer like Michael Hill, meaning that Working Capital boosts its cash flow, but aspects of its business model might explain that.

Finally, we subtract Capital Expenditures (CapEx) since these also reduce the company’s cash flow; we calculated these in a previous step.

Summing up all these items, we calculate and project Unlevered FCF across the 10-year period:

You can see the entire formula in Excel below: 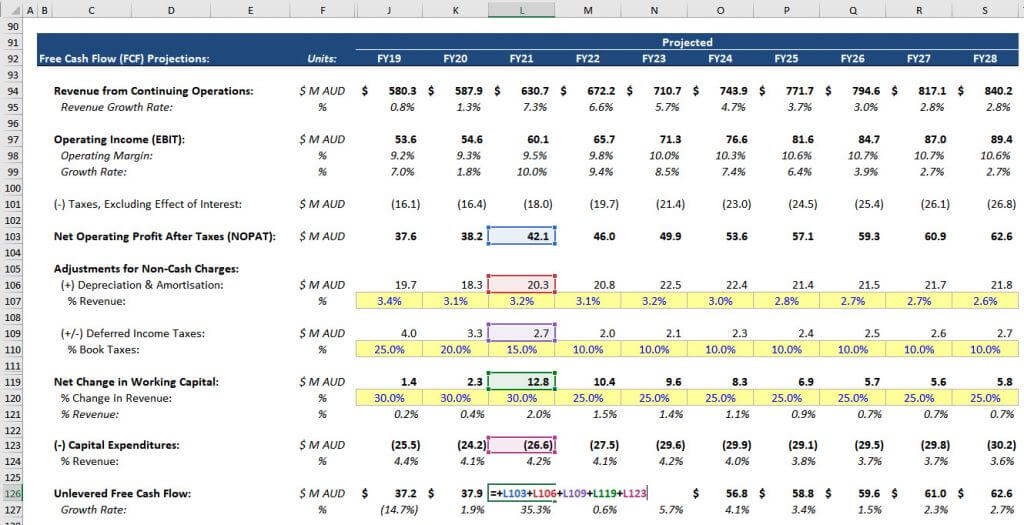 Unlevered FCF growth should slow down over time, and by the end of 10 years, it should be around the GDP growth rate or inflation rate (1-3%), which it is here.

Next, we have to calculate the Discount Rate and use it to discount these UFCFs to their Present Value.

Premium Course Signup
This website and our partners set cookies on your computer to improve our site and the ads you see. To learn more about
what data we collect and your privacy options, see our privacy policy.I Understand