In this tutorial, you’ll learn how bolt-on acquisitions work in both leveraged buyouts and growth equity deals, and you’ll see Excel-based examples for Atlassian and Cars.com.

Bolt-On Acquisitions Definition: Bolt-on acquisitions refer to deals in which a private equity-owned or backed company acquires smaller companies to become a “platform business” and grow more quickly than it could via organic means.

Why Do Private Equity Firms and Other Investment Firms Complete Bolt-On Acquisitions?

When a private equity firm acquires a company, it aims to earn a certain internal rate of return (IRR) on the deal (in this context, the IRR is similar to the annualized rate of return).

It is considering a new deal where it plans to contribute $400 million of Equity, fund the rest of the price with $600 million of Debt, and sell the company in 5 years.

So far, the IRR is below the targeted range:

The private equity firm could achieve the 20% IRR by increasing the Exit Enterprise Value or by reducing the amount of Debt that must be repaid upon exit.

To increase the Exit Enterprise Value, it could get the company’s EBITDA to grow more quickly or aim for a higher exit multiple by improving the company’s financial performance, such as its Return on Invested Capital (ROIC).

Growth is not necessarily a requirement if the company can use its capital more efficiently and/or repay more Debt.

In reality, however, growth makes it much easier to achieve this 20% IRR target.

If the company wants to grow, it could do so organically by hiring employees, expanding into new markets, and developing new products and services.

However, organic growth is risky and time-consuming because the company must spend money on new ideas that may or may not work.

Bolt-on acquisitions provide a “shortcut method” to achieve this growth.

They allow the company to acquire promising, smaller companies that could drive EBITDA growth, and they turn this acquirer into a “Platform Company” that’s more appealing to future buyers and public market investors.

These acquisitions are still risky because the integration process could go poorly, or the Platform Company could pay too much.

But some of the risk from organic growth is removed because these smaller companies already have proven products and services that are earning money.

Let’s say that a private equity firm acquires a Platform Company for a Purchase Enterprise Value of $1 billion, funded with $600 million of Debt and $400 million of Equity.

The Platform Company has $100 million of EBITDA (10x purchase multiple), and it generates $60 million of Free Cash Flow per year.

The Platform Company could do any of the following with this Free Cash Flow:

1) Aim for Organic Growth – Spend the money to hire more employees or expand into new markets.

2) Repay Debt – Repay some of the $600 million of Debt so that, upon exit, the private equity firm has less Debt to repay.

3) Let the FCF Accrue to Cash – Let the $60 million increase the company’s Cash balance so that, upon exit, the private equity firm earns more (this Cash balance is assumed to go to the PE firm).

4) Spend the FCF on Bolt-On Acquisitions – Spend the $60 million to acquire smaller companies that will immediately boost the Platform Company’s revenue, EBITDA, and other financial metrics.

Options #2 and #3 are “OK,” and they’ll often boost the IRR to acceptable levels.

With these options, the PE firm might earn an extra $60 million * 5 = $300 million in exit proceeds. Here’s what it looks like in Excel:

On the other hand, if executed properly, Option #4 could provide a multiplicative benefit because each bolt-on acquisition will boost the company’s EBITDA.

Potentially, the company’s exit multiple might even increase to some number above 10x.

That results in $37.5 million of extra EBITDA by Year 5, which equates to $375 million in extra proceeds, assuming the same 10x EBITDA multiple:

And if there’s multiple expansion because the company is using its capital more efficiently, the difference could be even bigger.

When Do Bolt-On Acquisitions Matter?

Of course, you can also see the downside of bolt-on acquisitions from the example above: they work well only when they’re executed at the right multiples – ideally, multiples lower than the purchase multiple in the deal.

If the Target Company paid 10x EBITDA for each acquisition, it would earn $6 million in extra EBITDA per year, which would mean $30 million in additional EBITDA by the end.

At a 10x multiple, that is $300 million in extra proceeds, which is exactly the same as the “Repay Debt” option:

If the acquired companies are growing quickly, the math may still work even if the Platform Company acquires them for higher multiples.

In general, though, bolt-on acquisitions make the most difference when they are executed at multiples lower than the Platform Company’s purchase multiple and when they contribute significantly to its EBITDA.

If the Platform Company pays a significantly higher multiple for each acquisition, it might be better off repaying Debt or letting its Cash balance build up:

How Do You Model Bolt-On Acquisitions in Leveraged Buyouts and Other Deals?

The modeling process for bolt-on acquisitions depends on how complex your model is.

If it’s a “cash flow only” model, such as a leveraged buyout where you have only the Income Statement and a partial Cash Flow Statement, it’s a fairly simple process, as shown in the example for Cars.com below: 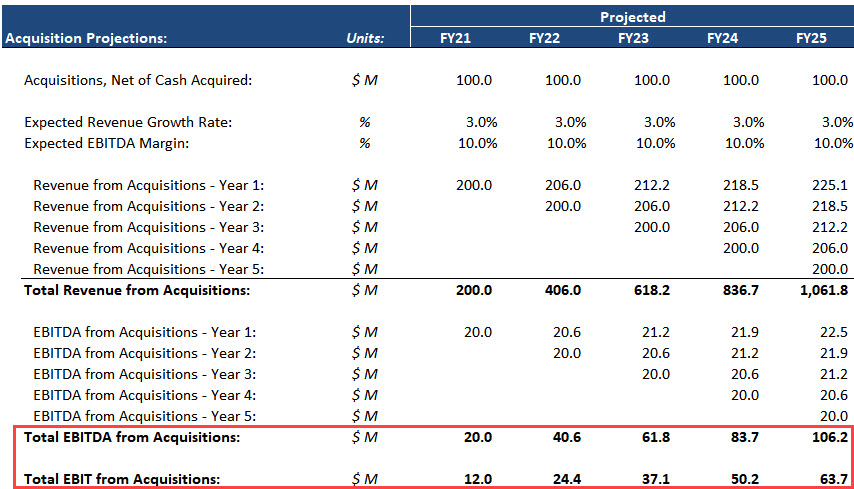 We project the acquisition price and revenue and EBITDA contribution each year and then incorporate the additional items into the full model: 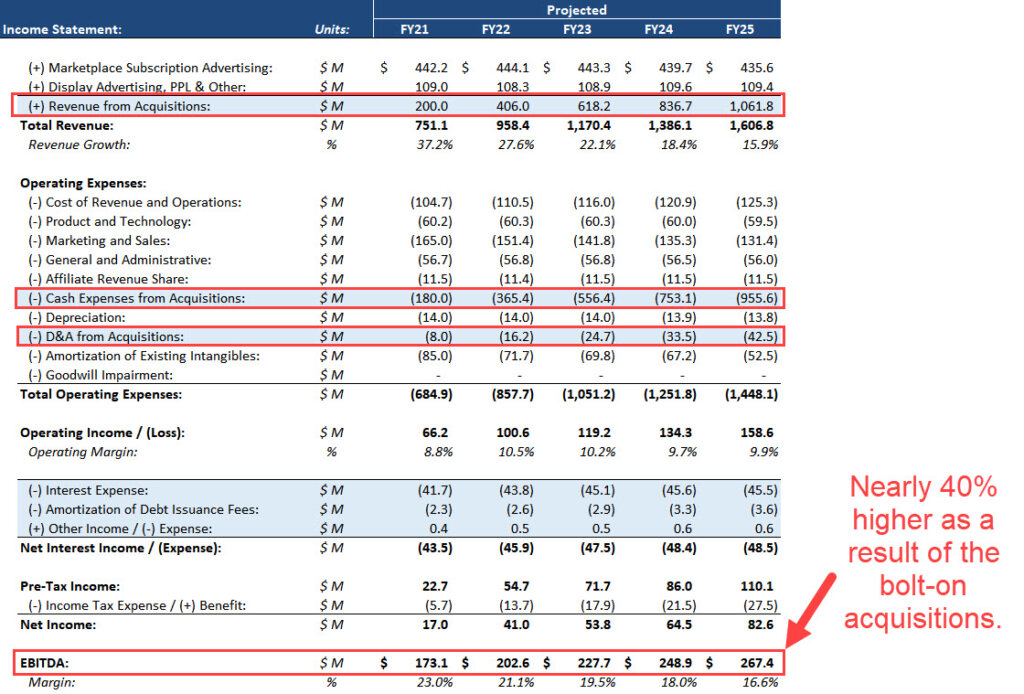 As a result, the company’s EBITDA is significantly higher by the end, resulting in a successful deal:

In a full 3-statement model, the process is more complicated because you must complete the purchase price allocation process for each acquired company and adjust the Platform Company’s Balance Sheet for items like Goodwill and Other Intangible Assets.

There’s an example of how to do this in our growth equity tutorial for Atlassian, but to summarize, you start by projecting each acquisition’s price, average multiple, and average margins, similar to the Cars.com example: 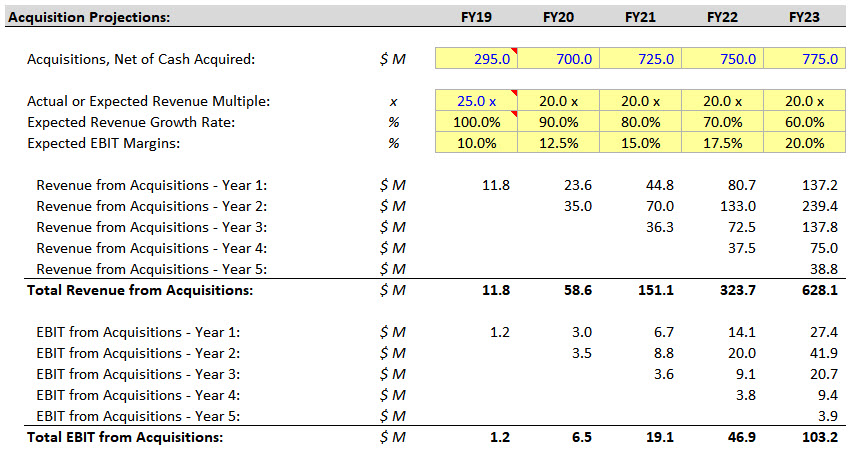 And then you assume a percentage of the purchase price is allocated to Goodwill, Other Intangibles, and other Balance Sheet line items, and you project the Amortization of Other Intangibles: 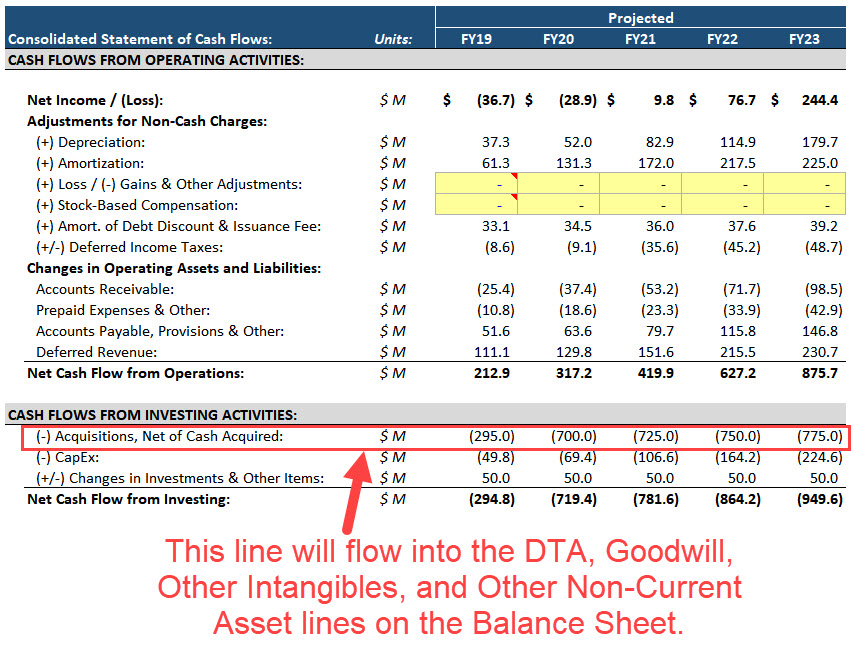 Yes, it takes a lot of time and effort if you include bolt-on acquisitions in a full 3-statement model.

The irony is that they’re nearly useless for Atlassian because all these deals are done at 20x revenue multiples.

As a result, there’s virtually no EBITDA contribution from these acquired companies.

These bolt-on acquisitions might still make sense in the long run if the companies grow significantly, but from a short-term financial perspective, it’s tough to justify the business case.