In this lesson, you’ll learn how the Section 382 limitations on Net Operating Loss (NOL) usage affect M&A deals and determine the transaction structures that Acquirers are likely to use.

Section 382 Definition: Section 382 of the U.S. tax code states that an Acquirer in an M&A deal structured as a Stock Purchase may use only a limited amount of the Target’s Net Operating Losses (NOLs) to reduce its Taxable Income each year and must write down the remaining NOL balance that will go unused.

The U.S. tax code is complicated and confusing, and Section 382 is a small part of it that sometimes affects merger models.

If you want the detailed “academic” treatment of this term, take a look at Cornell’s summary here.

We’re going to focus on the practical implications in financial models in this tutorial:

Why Do Net Operating Losses Matter in M&A Deals?

Traditionally, we discuss Net Operating Losses (NOLs) in the context of a company’s standalone operating performance.

If the company loses money (i.e., negative Pre-Tax Income) in one period, it accrues “losses” that it can use to reduce its Taxable Income in future periods.

However, many companies lose money over long periods and build up substantial NOL balances that could make them more attractive to potential acquirers.

But it’s not as simple as an Acquirer finding a Target with a huge NOL balance and then acquiring the Target and “taking” all its NOLs.

First of all, the transaction must be structured as a Stock Purchase rather than an Asset Purchase or 338(h)(10) Election (a deal type specific to the U.S. tax code).

A “Stock Purchase” means that the Acquirer gets all the Target’s Assets and Liabilities and all its off-Balance Sheet line items.

But in an “Asset Purchase,” the Acquirer selects the specific Assets it wants to acquire and the specific Liabilities it will assume, and it pays for only the Assets Acquired – Liabilities Assumed: 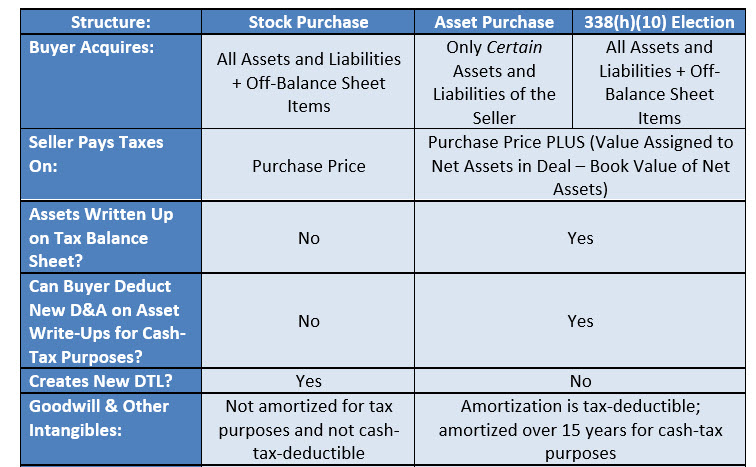 The main one is that the depreciation & amortization on asset write-ups is not cash-tax-deductible in Stock Purchases but is deductible in Asset Purchases.

Also, in an Asset Purchase or 338(h)(10) deal, the Target’s Net Operating Losses are written down 100%, so the Acquirer CANNOT use them after the deal closes.

Therefore, if an Acquirer finds a Target with a huge NOL balance, it must purchase the Target with a deal structured as a Stock Purchase – or the Target’s NOLs will be useless.

What Do the Section 382 Limitations Say About NOLs in M&A Deals?

Section 382 says that the maximum allowable annual usage of a Target’s NOLs equals the Equity Purchase Price * the Maximum of the Past 3 Months’ “Adjusted Long-Term Rates.”

For example, let’s say the Target’s Equity Value or Market Cap is $500 million. This Target also has $100 million in NOLs.

The Acquirer offers a 20% premium for the Target, so the Equity Purchase Price is $600 million.

The “Adjusted Long-Term Rates” are determined by the IRS (the tax agency in the U.S.), and you can find a monthly list here.

These rates are close to the current Federal Funds Rate, or the interest rate that banks charge each other to borrow money. The Federal Reserve normally sets this rate.

Would the Acquirer have to write down any portion of the Target’s NOL balance in this case?

We don’t know because we don’t know when the Target’s NOLs expire – and there’s always an expiration date, which depends on the country and region (state/province).

For example, let’s say that the Target’s NOLs expire 20 years after the deal closes.

Since 20 * $12 million = $240 million, which is greater than the Target’s balance of $100 million, the Acquirer will be able to use all the Target’s NOL before they expire.

Therefore, it will not write down any portion of the NOLs in this case.

On the other hand, let’s say that the NOLs expire 5 years after the deal closes.

Therefore, the Acquirer cannot use all the Target’s NOLs, so it will have to write down $100 million – $60 million = $40 million when the deal closes.

The bottom line is that if an Acquirer wants to do a deal because of the Target’s NOLs, it will have to scrutinize the expiration date(s) of those NOLs before making an offer to acquire the Target.

Otherwise, the Acquirer could end up with an expensive asset that’s not very useful.

In a real merger model, you would apply Section 382 by finding the Target’s Net Operating Losses and calculating how much the Acquirer could use each year:

In this deal, no write-down is necessary because the Acquirer can easily apply the Target’s entire NOL balance before the NOLs expire.

But if the expiration period were much shorter, such as 3 years, a write-down would be necessary:

Continuing with the first scenario here – the NOLs that expire in 10 years – we continue with the rest of the model by calculating the Taxable Income for the combined company.

We do this by adding together the Income Statements of the Acquirer and Target and adjusting for acquisition effects, such as the interest paid on new debt, the foregone interest on cash, and the depreciation & amortization on asset write-ups created in the deal.

Since this new D&A is not cash-tax deductible in a Stock Purchase, the Taxable Income looks like this:

Once we’ve calculated the “Pre-NOL Cash Taxable Income,” we can apply the amount of NOLs the Acquirer can use in each period.

The annual amount of $21.5 million is divided by 4 since this is a quarterly model: 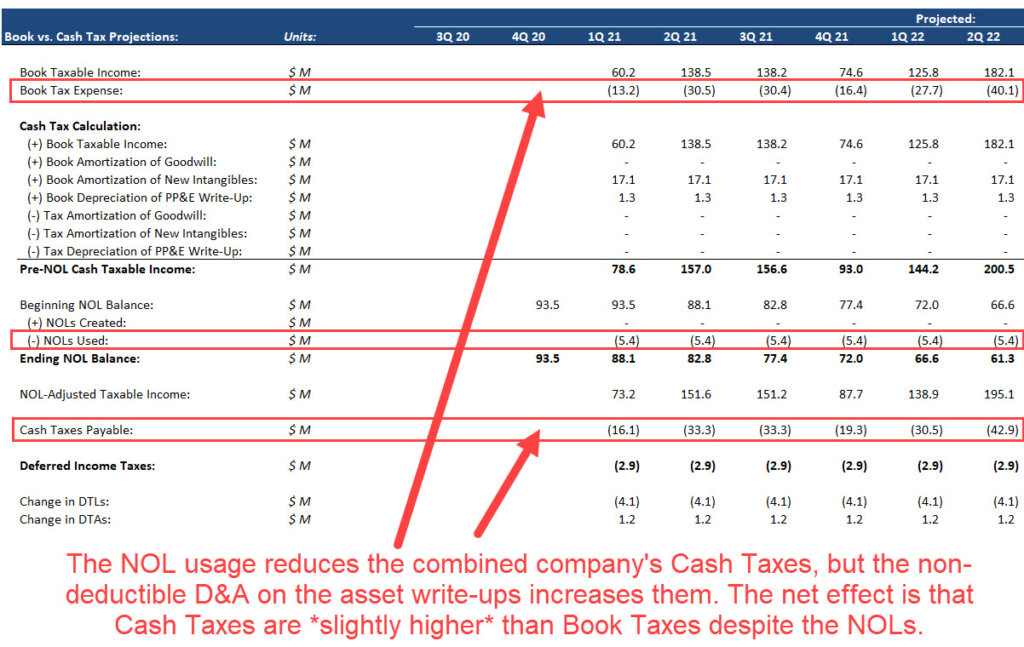 Because the Target’s NOL balance is so small here – less than $100 million vs. an Equity Purchase Price of $2.5 billion – it barely makes a difference.

The NOLs are a nice bonus for the Acquirer, but hardly a primary reason to do the deal.

The Section 382 limitations tend to make a bigger difference when:

2) Interest rates are low, so the annual NOL usage is quite limited; and

3) The combined company has positive Taxable Income above the allowable NOL usage in each period.

Some deals are motivated by the Target’s Net Operating Losses, but they’re not common in most industries.

Even in fields like technology and biotech, where early-stage startups lose huge sums of money, most acquisitions are motivated by companies’ technology and intellectual property rather than their tax attributes.

But an Acquirer will never say “no” to the bonus of an NOL balance acquired in a deal – at least, not if it understands Section 382 of the U.S. tax code.

Learn Financial Modeling from A to Z

Learn accounting, valuation, and financial modeling from the ground up - including stock pitches, case studies, deal and investment recommendations, and more.